We share Niko’s story with our friends and family …. and the world. 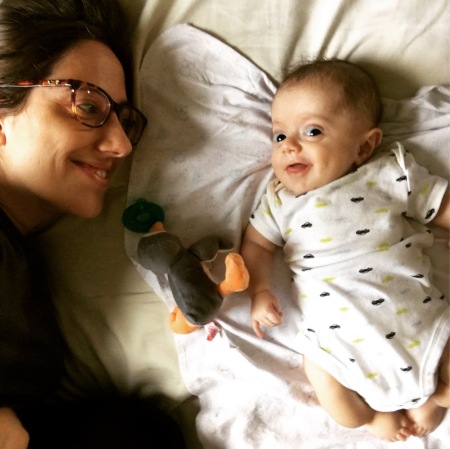 As we started physical therapy (PT) and occupational therapy (OT), I tried different positions out with Niko. Tummy time was always a challenge, from getting him to the position, to what to position him on, fearing fracturing, and then if he’d even tolerate it.

After his infusion, I started to feel brave in trying new things… I have always thrown my babies around, over my shoulder, facing out, on my hip … they’ve been tossed… so it was certainly new waters with a fragile baby who not only had fragile bones, but very low muscle tone, so he wasn’t able to hold himself up while I held him.

Bebe and the lasagne pan! Bath time was still challenging, but every once in awhile he would seem to enjoy it and move a lot more.

The photo on the left was a rare moment. I hardly put him in this as I felt like it wasn’t supporting his spine enough. He must’ve fallen asleep here for a minute… and there is his penguin, not very far away!

Truly LOVES her little brother… she talks to him and kisses him all day… she is very careful with him and I’m very careful to stay close when they are together.

Niko in his reflux chair! It’s called a reflux chair, but it was great for us because he could sit on it safely and it would give him a new perspective. I loved keeping him flat as often as I could, and balancing a recline position. 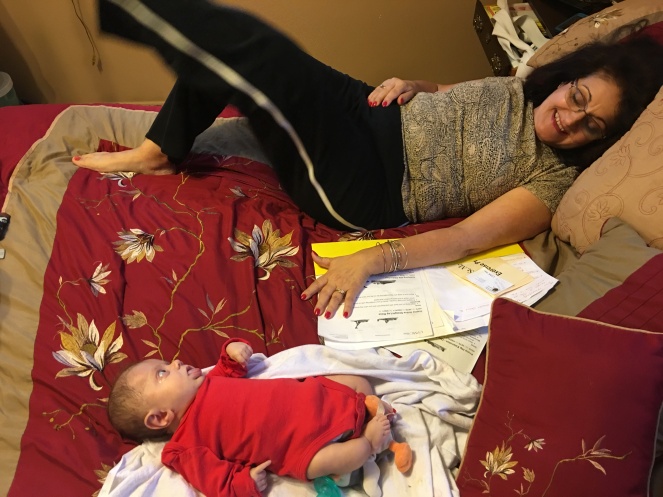 We moved out of our home, which we lived in for almost TEN years …. and stayed with my in-laws for two months.

In this picture, Nonni and Niko were doing their legs exercises… Nonni had double knee surgery two months prior and here they are together… working it. 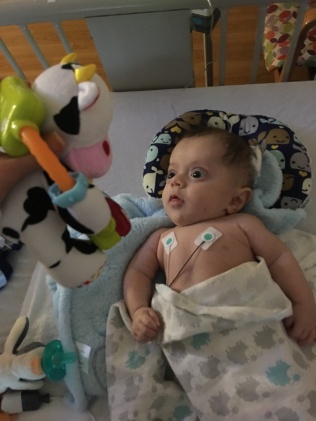 We were admitted for one night and two days, and Niko’s IV stayed in for both doses and he did great!

48 hours after we left the hospital, we had to go back for a blood draw to check his calcium. This would be the last infusion we would have to do a follow up draw for, since his calcium levels were always good. Pamidronate can cause levels to drop so we have to check for them in the beginning of treatment.

Our pediatrician told us to go to the ER and she made a phone call to them to see if she could get them to do the IV.

Me, Truly and Niko went into the ER and I hadn’t been there since we took Truly in for croup/respiratory distress when she was 10 months old. I felt so much better being there for a blood draw, if you could believe it.

They weren’t crowded at all and were so nice to us. A nurse came out to get us and he was so thoughtful and caring. He took us back to a room, and I realized it was a room used for such emergencies and the nerves rushed over me as I felt relieved to be there under no emergent circumstances.

He called the IV team, but they were slammed. We discussed at length where we should put the IV. He was hesitant to do a scalp vein IV, and explored all other options. He didn’t have access to the ultrasound machine, which we had used in a thigh vein for a blood draw after Niko’s first infusion.

We finally decided on giving the heel prick a try. He showed me the difference between a prick on a finger and a heel prick, which actually slices the skin. We practiced how I would hold his foot, mindful of his ankle. We got our nerve together and I held down his foot. Insert the prick. Nothing happened… no cry… no blood… we both looked at each other and took a deep breath.

… he called for back up and decided we could try the scalp vein IV. Believe it or not, he got it on the first try and it didn’t take him long at all. What a joyous moment it was (and still is) when I asked if it’s working and they say that it is.

He wasn’t sure if he got enough blood, (and the nurses who do Niko’s IV’s never think they get enough) and I reassure him that all we need is the calcium so make sure they run that first. RUN THE CALCIUM FIRST!

After we finished, he got a called from the IV team that they were ready and he sounded so relieved when he said “Now that I already got it!”

We were so excited and I can just feel how they really do their best in such a new and fragile situation. It’s such a relief when it goes quickly and Niko is back to drinking his bottle and sleeping in no time. 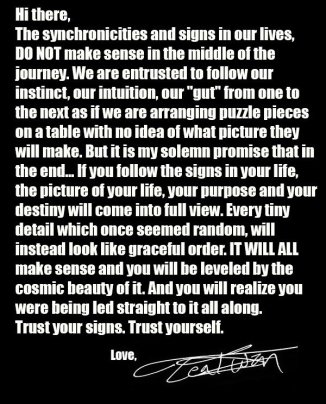 Will he ever grow?

I wouldn’t lay awake, because once my head hit that pillow, I was out… but I would spend time sitting awake, daydreaming, wondering, worrying, if Niko was going to grow.

Not knowing a whole lot about OI, aside from immersing myself in our OI Parents group and as many old posts as I could read… I fixated on whether Niko would grow… would his ribs sustain further fractures? Would he continue breathing well? Would he ever uncurl his legs? Would he ever eat more, would he ever gain weight? Would he be 8lbs forever? Time.. standing… still…

I had this beautiful, truly healthy baby and I would just let the dread wash over me as every day he would get a little bit bigger and a little bit stronger.

I felt like normalcy and stability was creeping up on us.

I started to become very tuned into what Niko needed and his rhythm. I started to feel less nervous about his every moment and instead passionate about every move he made!

He was stretching out his legs more … moving his arms more … tolerating tummy time just a little more … not really sleeping more at night, but getting more regular with his itty bitty bottles at a time.

He was getting more hair!

… and he was smiling more often.

I was still getting used to functioning with him in new settings.

… but dressing him in cute shirts more!

I pull the onesies up over his legs and slowly guide his arm into the sleeves through slight pressure on his shoulder blades.

There is as little movement of the limbs as possible.

Dapper Dan and his Grammie!

Holidays are a wonderful time to spend with family and we love it. It carried a new sense of excitement with Niko, and also a new stress. He’s all hands on deck kinda dude. And so I am constantly guarding him and keeping him fed, changed and happy. These adorable pants lasted a couple minutes before I changed his diaper and his outfit. #nopantniko

My mom was in town and this was really the first time someone else was holding him for longer periods. Only took 4 months! 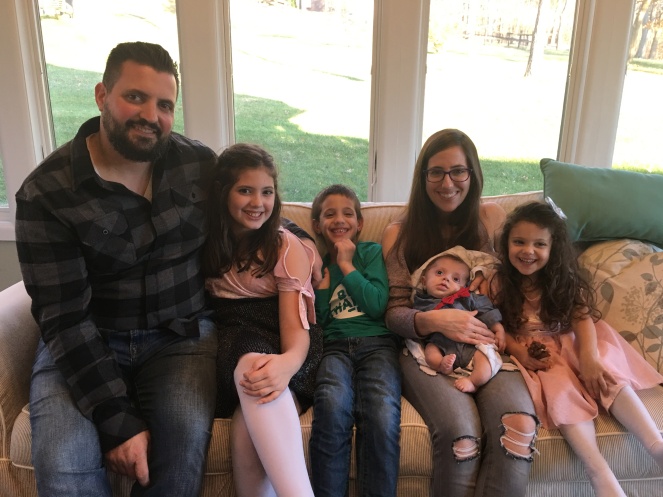 I love this picture … everyone looks so happy! And it’s because we are! Thanksgiving is one of my favorite times, food and family is top notch… I love how Niko’s bow isn’t actually on him, just sitting there… my eye lids may be heavy, but my belly and my heart is full! 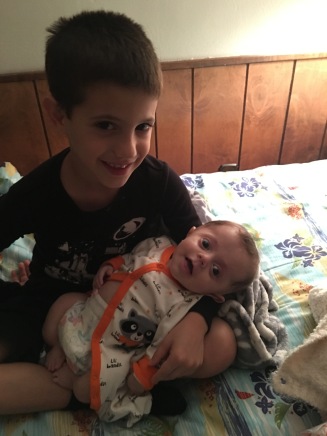 Niko is just mesmorized by his brother and sisters. They are so gentle with him. Theo was so proud and so excited to hold his little brother. He may be a rough and tumble kid most of the time, but not with his brother… he loves caring for him and being soft for him.

Kids starting a new school, living with my in-laws, sharing a room with Charlie, Truly (and Niko)… Sean spending every waking hour working his business and working on getting our home able to be lived in…

… it did feel like time was standing still… but everyday I knew we were closer to something greater… and yet it’s finding peace in the moment… passion in milestones … and for Niko, they are all meaningful moments. Every time he lifts his arm in a way he has never done before, it’s exciting… he kicks his legs all at once I take picture after picture of everything he does.

There were and still are few moments in the day when this guy isn’t seeing my face up close and personal. I have a lot to cheer on… he impresses and excites me every single moment of the time we spend together.

I may have slept very little during these months, but I still had infinite energy to show up…. juggle, organize, shower, not shower, eat, not eat, do laundry, drive, listen, pump, pump, pump, worry, relax, cry, pump, be ready, be terrified, be brave, be tired, be excited and driven to the brink of breakdowns.

Check back as I share moving into our new home and Niko’s first Christmas! All on the same day!!

View all posts by Nikki Watson

One thought on “Brave and strong: Niko grows, 3 months and another Pamidronate infusion” 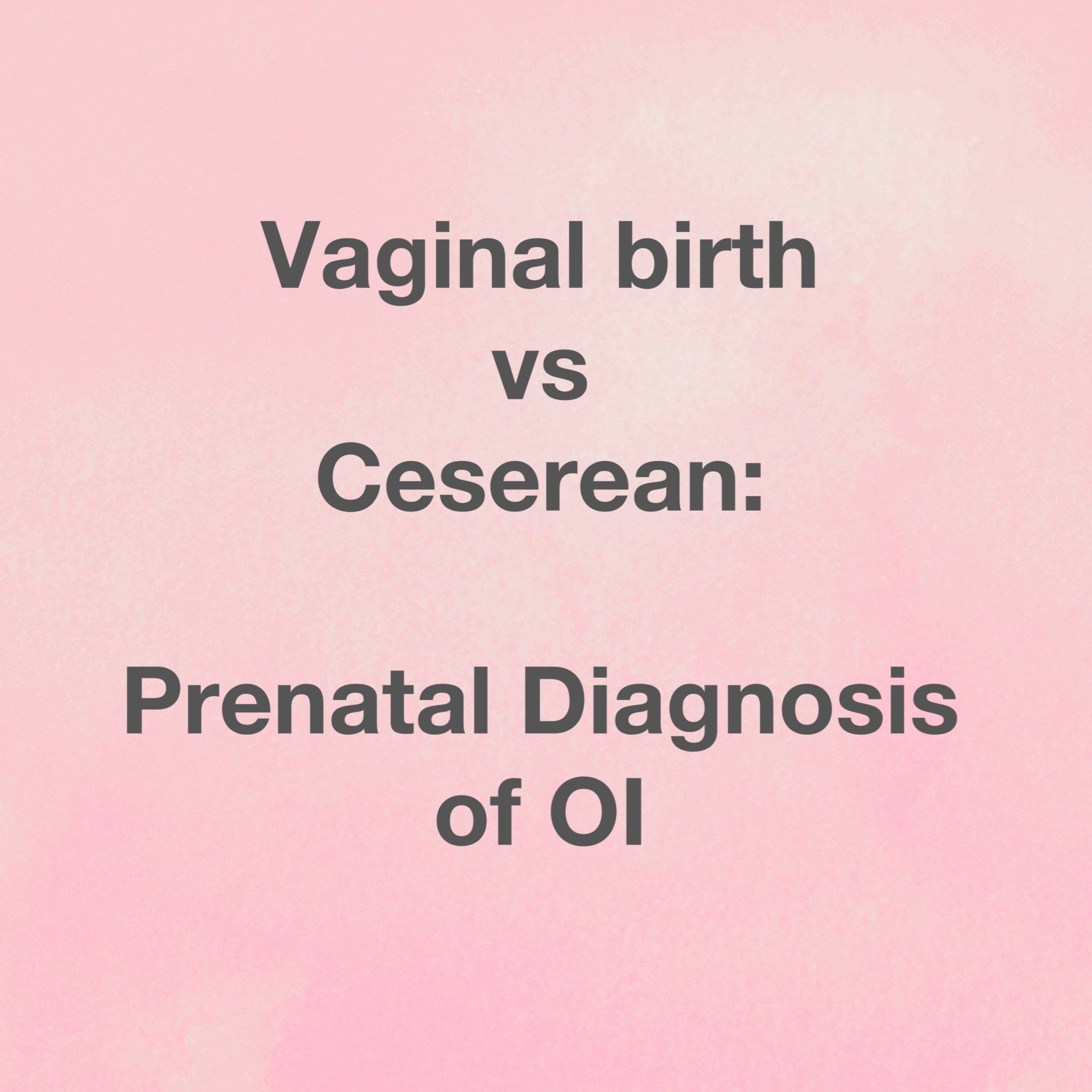 The book that changed my life

What I love about moms